Moreschi designs and manufactures systems for the loading and unloading of goods that are perfectly suited to the different needs of each customer, equipped with a complete and innovative interface between the warehouse and any means of transport.
It is essential to have a strong loading ramp: forklifts and transpallets, loaded with material, pass over it continuously, stressing the structure.
An efficient loading point allows all loading and unloading operations to be carried out in the shortest possible time and in total safety. 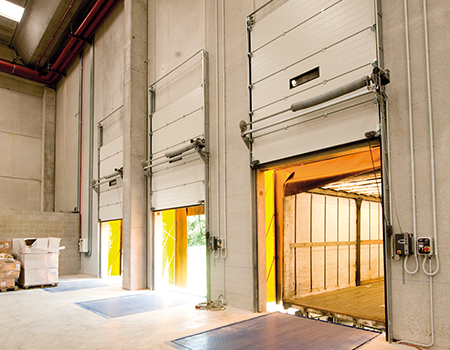 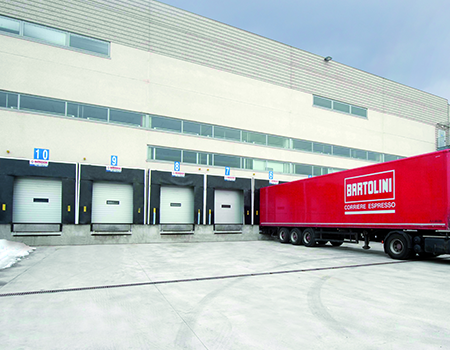 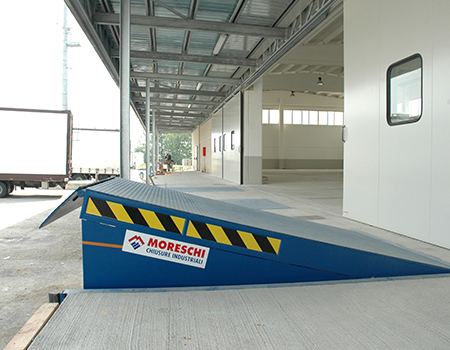 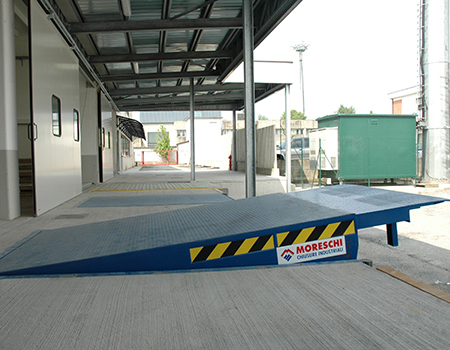 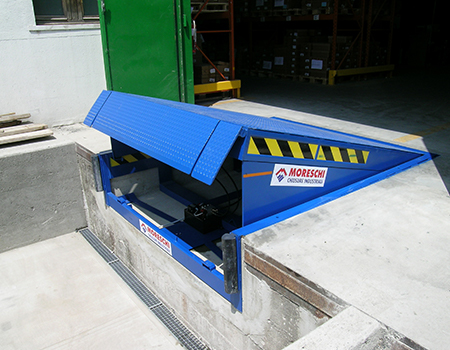 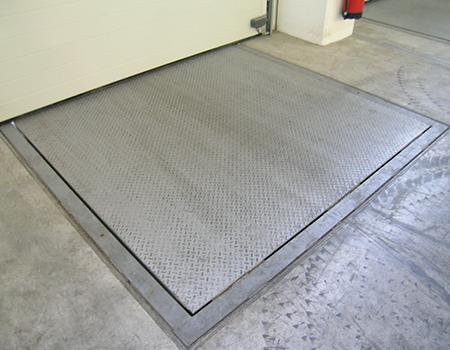 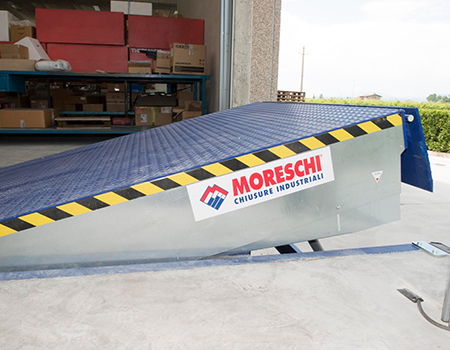 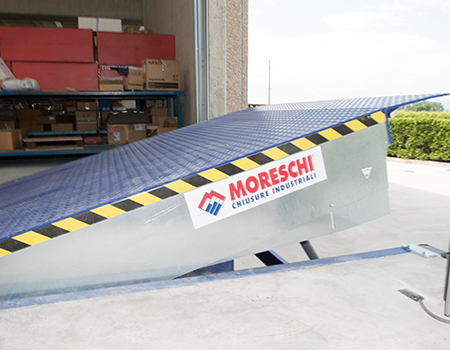 The loading ramp is made up of a self-supporting monobloc structure with side walls (foot guards), upper platform and beak connection to the vehicle to guarantee the loading/unloading of goods in conditions of maximum safety. The ramp is moved by means of an external motor-driven hydraulic power unit positioned frontally under the platform. The valve unit allows, even in the event of an electrical failure, to safely complete loading operations and return the ramp to its rest position. The ramp is equipped with an electric panel with automatic cycle operation with emergency button that interrupts the movement of the ramp in case of danger. The electrical panel must be positioned near the ramp so that the operator is able to observe all its movements. The connection cables for solenoid valve and motor are fireproof with a standard length of 6m. (from the edge of the pit) and wired in a single cable to allow quick connection to the electrical panel. Each ramp is operated by a control panel and an independent control unit. In the event of activation of the main switch or power failure, all movements cease. The power supply can only be re-established by manual control, which ensures that no uncontrolled ramp movements occur. Hydraulic emergency stop mounted directly in the lifting cylinder which, in the event of sudden departure of the vehicle, intervenes by controlling the descent speed of the ramp to less than 0.05 m/s. The working slope of the loading ramps, according to the reference standard, must not exceed ± 12.5%. The maximum negative inclination is mechanically limited. The maximum positive inclination, in the radius spout version, is indicated by a red band and in the telescopic spout version it is mechanically limited. Standard nominal load capacity of 6000 Kg. of which 5400 (90%) concentrated on a single axle (trolley with 4 wheels minimum Ø 250 mm). Load capacity means the weight of the highest mobile load (including goods, persons and means of transport). In the resting condition, with the beak resting in the appropriate stops, the ramp forms a single block with the floor and is passable in all directions. The rear hinges of the platform consist of a series of sectors and suitably sized pins. The hinge is divided into sectors to allow the central pin to be removed if necessary. The connecting spout is operated by a single-acting cylinder and supplied bent to rest perfectly on the truck body. If it is necessary to load trucks of different widths, it is possible to use a spout composed of three elements: a central element and two lateral elements that allow an excellent versatility of the ramp width.

The connecting beak can be of the type: -"radius" with rotating movement; standard length 400mm.; bent and made in a single sector. The spoked beak rotates on self-cleaning hinges that do not allow various materials and dirt to interfere in its movement. -"telescopic" with extensible movement; standard lengths 500mm. and 1000mm.; folded and made in a single sector. The ramps with width 2200mm. are always supplied with beak in three sectors.

In order to attenuate possible impacts between the truck and the dock, the ramp structure is delivered with hard rubber pads which, thanks to a special conformation, have the ability to compress and soften the impact.

Pit edge frame suitably dimensioned and completed with welded clamps to allow installation to wall (operation to be paid for by the customer). The side components (foot guards) visible on the ramps, whether in the lowered or raised position, are marked in yellow and black to signal the danger. The risks of crushing and shearing between the pit edge and the ramp frame are avoided by using telescopic protection panels. The risks of crushing and shearing between the folded down rail and the ramp frame are prevented by leaving a vertical safety distance of at least 25mm. between the lip edge and the frame components in the rest position. The risks of crushing and shearing between the ramp and the loading surfaces of the vehicles are considered to have been overcome by positioning the control panel so that the operator can easily observe all the movements of the ramp.

The ramp is equipped with a mechanical prop which, once positioned, supports the load-free ramp in the maintenance position. The prop is an integral part of the ramp and cannot be unintentionally disconnected. The ramp can be connected to a limit switch to prevent its operation before the door installed on the loading bay is fully opened. All ramps are built in full compliance with European Standard En 1398.

Suitable for outdoor use.

More information about these products?

See all the solutions proposed by Moreschi.